Winning Close Games: Trailing at the end of a game

Fouling plays a critical part in the outcome of the game, especially when it comes playoff time. Fouls were added to the basketball rule book to penalize; however, intelligent players and teams can use fouls to their advantage. When trailing by more than two offensive possessions late in the end, the clock is your worst enemy not your opponent. Every second counts, so if you have to foul, foul immediately. Do not let any precious time run off. Legendary, Hall of Fame coach, Dean Smith, was a mastermind of this end of game strategy.

However, when it comes to fouling to gain a competitive edge do not assume that players know how to foul. Have you practiced fouling? in reality, when a coach tells their players to foul, they are most likely to just push or grab an opponent resulting in an intentional foul. Since the opponent gets to shoot free throws and retains ball possession, this is disastrous. Players need to know how to foul, when to foul, and who to foul. 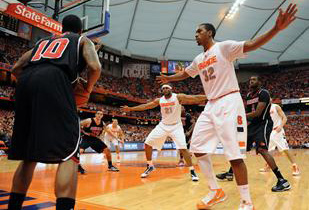 These end of game fouling techniques must practiced. When taking a quick foul, players should first attack the passing lane and go for the ball. A steal, five second count or picking up an offensive charge is much better than a foul. If unsuccessful, players should foul by trying to knock the ball out of their opponent’s hands. Every once in awhile, they just might be successful in knocking the ball loose. In addition, officials will, occasionally, be out of position and not call the foul. When trapping, execute one hard trap and then foul. Learn more see Clock Management & Fouling – Premium Members Click Here

When faced with a must foul situation, do not forget to substitute!!! During a timeout or when shooting a free throw, be sure to make defensive substitutions and put players into the game that can afford to foul instead of putting your best players into foul trouble or even losing them to disqualification. Once the foul has been committed and the clock stopped, players in foul trouble or key players can be reinserted back into the game. How many times in the recent NCAA Tournament games have you see key players, needlessly, foul out in must foul situations?

There is no room in the game of basketball for hard fouls (even on the professional level) especially on lay ups when shooters are most vulnerable to injury. Play hard, but play fair. Basketball carries more than enough injury risk without a player intentionally or unintentionally injuring another player when fouling. In addition, there is never any satisfaction or sense of accomplishment in winning when the victory is achieved by injuring an opponent or breaking the rules of the game.

Playing Smart: Eliminating the “and one” fouls

The ICE offense is an all out basket attack. Using the term “ICE” makes the opponent think that you are going to hold the ball, but in reality ICE attacks the basket on every cut. In addition to protecting a lead at the end of game, ICE can be used very effectively to counter severe defensive pressure. When an opponent is applying so much defensive pressure that it is difficult to run offense, ICE can save the day with it’s constant back and basket cuts against defensive over play. ICE Spread Offense – Premium Members Click Here