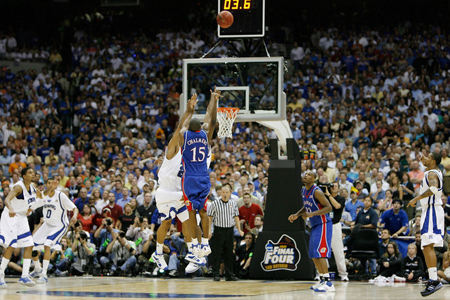 To win a major championship, you probably will have to win a least two games at the buzzer!

15 Nightmares to Avoid That Will Upset Your Championship Dreams and Haunt You the Rest of Your Life.

“Failing to prepare is preparing to fail.” — Coach John Wooden

Not protecting a hard earned lead

When ahead late in the game the game clock becomes your ally. However, you must use it wisely. Keep it running and do not stop it (unless in very serious trouble). Coaches may elect to spread the court on offense to take time off the clock and cut down on the number of opponent’s offensive possessions. However, in doing so, be sure to continue to make basket cuts and attack the basket. Holding the ball for the sake of trying to run time off the clock will allow the defense to get more aggressive and disruptive. You must attack the basket. If the opponent tries to trap or double team, assume a 2-1-2 alignment and move the ball.

Watching the ball and not boxing out on a last shot

Giving up an offensive rebound on a missed free throw

Defensively, teams should work hard to never give up an offensive rebound off a missed free throw situation during a game. Many of championships are lost because of a failure to box out on free throws. Players should be well drilled in boxing out on all free throw situations. Players must also communicate to make sure that the shooter is boxed out. Pinch or double team against a really good offensive rebounder. Be determined to rebound the ball.

Allowing precious time to run off the clock before fouling

Hopefully, you are well prepared and in control of the game so that you will not need to resort to clock management. However, if you ever fall behind late in the game don’t give up! By using time outs and fouls, the last few minutes of a game can be an eternity. At this point in the game, the clock is your worst enemy, not the opponents, so every second counts. Therefore, do not let precious time run off the clock before fouling. If you need to foul, foul right away.

Not substituting for key players in must foul situations

When fouling to the stop the clock at the end of the game, during a timeout or free throw or defensive out of bounds situation, substitute players into the game that can afford to foul instead of losing their best players because of disqualification. Also, key players in foul trouble are reluctant to foul, allowing precious time to run off the game clock.  Once a foul has been committed, stopping the clock, players in foul trouble can be reinserted back into the game.

Not teaching and practicing how to foul

Most coaches assume players know how to foul. However, in reality, when a coach tell the players to foul, they will simply go out and just push or grab an opponent resulting in an intentional foul. Since the opponent gets to shoot free throws and retains ball possession, this is disastrous.

CAUTION: There is no room in the game of basketball for hard fouls (even in the NBA) especially on lay ups when shooters are most vulnerable to injury. Play hard but play fair. Basketball carries more than enough injury risk without a player intentionally or unintentionally injuring another player when fouling.

Save your timeouts. You will need at least two at the end of a closely fought game. Force the opponent to use their time outs especially early in the game. Early in the game, use substitutes to make changes and adjustments rather than taking a valuable time out. Play through adversity. Do not ever call a timeout in reaction or frustration to bad call or play. It will only waste one of your valuable time outs! Having time outs at the end of the game will definitely increase your chances of winning.

Not knowing the time out situation

Coming out of time outs, make sure every player must knows the number of time outs remaining along with the team foul situation. This is extremely important at the end of a close game. Games and national titles have been lost by players taking a timeout after a team has used their last timeout.

Not knowing and taking advantage of the team foul situation

All too often games are lost on last second shots because a players are unaware that they had a foul(s) to give. After timeouts all players should be aware of the team foul situation and if they have any fouls to give. Keeping an opponent out of the bonus free throw situation is a real advantage.

Not avoiding the opponent’s intentional foul

Do not allow the opponent to foul in order to stop the clock. Move the ball and run as much precious time off the clock as possible  before the opponent can foul. Also, be sure to have your best free throw shooters in the game.

Not prepared for intentionally missing a free throw

Not prepared for last shot situations

End of game situations really become paramount when a single shot can make the difference of winning and losing along with determining a team’s playoff hopes and fate. Therefore, to be successful, teams must be prepare for last shot situations. A last shot situation is not just a simple matter of drawing up a play. There are numerous last shot situations to address dependent on court location and time on the clock. Be sure to get the ball into the hands of your best player, and let them hit the open shot or pass to an open teammate. Keep the play simple and execute. The more complex the action, the greater chance that a breakdown will occur.

CAUTION: Don’t ever expect players to execute anything they have not practiced. The chances of drawing up a last shot play during a timeout and having it be successful is very minimal.

Taking the last shot too soon

Taking the last shot too soon, even if it is made, provides the opponent with an opportunity to tie or win the game. When holding for the last shot in a game, players should be in position with 10 seconds and initate the play with 8 seconds remaining. This will allow enough time to take the shot and go to the offensive boards for a second effort. If the opponent should rebound, they will not have enough time to advanced the ball down the court for a shot.

Failure to inbound the ball

Many championships have been lost because teams were not able to inbound ball at end of game. It is not easy to inbound the ball under pressure. In making an inbounds pass, the passer is facing a five against four defensive advantage and only has five (5) seconds in which to locate a receiver and make a successful inbounds pass. In addition, to this numerical disadvantage, by rule the inbounder cannot move, except after a made shot. This provides the defense with the opportunity to jam or smother the passer very effectively with an active defender on ball. Also, on baseline out of bound situations, the backboard comes into play and becomes a real obstacle which the inbounds passer has to contend. Good inbounds passers are vital, and a team will not win a championship without one.