Looking for a Gift for the basketball enthusiast on your list?

How about giving them a HoopTactics Premium Membership? A perfect gift that will last for entire year and then some. Click Here

During Pre-season practice games, it is wise to rest your top players as much as possible. This will save their “Legs” for the critical end of the season and play-offs as well as reducing the risk of injury resulting from playing when physically tired. However, just as important, by giving reserves valuable playing time and experience, it will develop a team’s depth. In the event that a top-lined player is lost during a game or for the season, a player with quality game experience will be able to step-in and take their spot.

On the colligate level, where RPI ratings are important for post season play and ratings, resting top players is very difficult. However, the basketball season is like a marathon, and you need players with “Fresh Legs” at the end. Forget the stats and rest your top players whenever possible. Go for the “Gold.” Many of Championship hopes are lost because of tired legs at the end of a long season.

When the opponent spreads the court and tries to hold the ball, the Quarter Court trap becomes a viable defensive weapon.  It can also be used as surprise tactic after an opponent time out to force a quick turnover or to force the opponent into taking a valuable timeout.  The Quarter Court trap is deployed out of a 1-3-1 alignment which readily allows for trapping or double teaming the ball in the corners. It is a fairly easy defense to teach and learn. However, when deployed at the right time, it can create havoc and panic against any opponent who is not prepared to attack constant double teams.

When the ball is in the top right corner, defenders X1 and X3 execute a hard double team. X4 attacks the baseline passing lane and X2 cuts off any cross court passes. Post X5 keeps the ball out of the middle.

If the ball is passed to the right baseline corner, X3 and X4 trap. X1 denies any passes back out, X2 cuts off the cross court passes, and X5 keeps the ball out of the middle.

When the ball is in the top left corner, X1 and X2 execute a hard double team. X4 attacks the baseline passing lane and X3 cuts off any cross court passes. Post X5 keeps the ball out of the middle.

If the ball is passed to the left baseline corner, defenders X2 and X4 trap. X1 denies any passes back out, X3 responsible for cross court passes, and post X5 keeps the ball out of the middle.

Should the ball get successfully into the middle, defender X5 assumes a “Nose on Chest” On-Ball position pushing O5 towards a corner or baseline pushpoint.

Coaches, on all levels, should not make the mistake of assuming and taking for granted that players are skilled in attacking out numbered situations. In fact, there are very few coaches that actually take the time to teach or reinforce the principles and techniques required to successfully attack and score on out number situations. Failure to take advantage and capitalize on these situations will not only make the difference in winning or losing close games, it will also cancel any great defensive effort that created the out numbered situation in the first place. 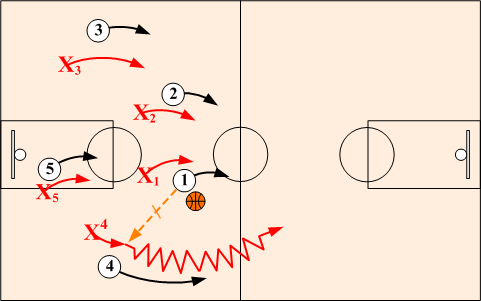 On all breakaways, it is imperative that you score. It is important that the player take as few dribbles as possible to get to the basket in order to prevent any defensive pursuit (“Wolf”) catching up with them from behind. Teammates should attempt to cut off defensive pursuit and/or get into rebounding position to follow up on any missed shot.

A five-on-zero (5-on-0) situation should never occur. The last two players, trailer and safety, should not go beyond half court assuming defensive responsibilities to prevent any counter break if the ball is turned over on the break away or ready to apply full court pressure after a successful basket.

CAUTION: Missed Layups
Basketball is a game of habits. Missed layups during a game can be traced directly back to practice. Therefore, do NOT ignore or tolerate missed layups in practice.

Anytime a layup is missed in any drill, the player has automatic 10 push ups If a passer is involved on the missed layup, they too have 10 push ups Players will quickly understand the importance of making layups (finishing) and start taking missed layups very seriously.
Premium Members Learn More: