Looking for a Gift for the basketball enthusiast on your list?

How about giving them a Advanced Basketball Defense? A perfect gift that will last for years to come. Click Here

Quick Tip: Teaching – The Key to Satisfaction and Success

Unfortunately, along with this increased importance being placed on winning, there has been a significant slippage in coaches’ teaching skills and abilities.  However, winning is short term. The real success in coaching comes with teaching and assisting players to become the best they are capable of becoming “on” and “off” the court.

The importance of the sixth person(s) role in basketball cannot be over emphasized. It is one thing all excellent teams have in common. Establishing and utilizing the sixth person role in many ways is a much more important coach’s decision than determining the starters. To be successful, the sixth person(s) must possess better skills and leadership than some of the starters. In addition, the sixth person usually can play multiple positions. Without exception, when they enter the game, their role is to energize and make the team stronger. As a result, if the game is tied, it will provide the necessary boost to give the team the lead. If a team is already ahead, it will increase the lead, and if the team should be behind, it will afford them a chance to catch up.

In most cases the sixth person role is filled by a single player. However, it can be multiple players and on rare occasions even five players. Determining and getting a player to accept the sixth person role can be a challenge since player’s and parents’ ego’s can be involved. However, by communicating the vital importance of this unselfish team role, they should be more than likely to understand and accept the role as a real honor rather than a demotion. To learn more – Click Here

Featured Play: Baseline Out of Bounds – “Pick the Picker” 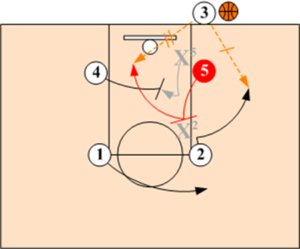 The out of bounds plays presented by HoopTactics have been proven, over time, to create a high percentage shot with two to three options. If a high percentage shot is not available, then each play flows directly into a predetermined continuity which eliminates any rushed shots or need to back the ball out and call a set play. This “Pick the Picker” baseline out of bounds play is a quick hitting screening play. It is sure to produce an easy layup shot against any team that is not prepared to defend it. Learn More – Click Here

Seven effective ways to attack On-Ball screens include: Prevention, Show & Recover, Switching, Trapping, Trapping Early, Jamming and Shadow (zone). Fortunately, players will not be expected to execute all the different ways to disrupt On Ball screens during a game. In fact, normally only one or two of the options will be deployed during a single game based on the opponent’s ballhandler and screener specific strengths and weaknesses. However, these options are subject to change during the course of a game. Therefore, to be successful in attacking and disrupting On-Ball screens, they must be constantly analyzed during the game as to why and how they are being set. Once analyzed, the defense can take the initiative, and readily attack it. Learn More – Click Here

Coaches love to see players go to the floor for loose balls. However, like taking an offensive charge, players must be taught how properly dive for loose balls without sacrificing their bodies or risk of injury. Diving for the ball should be graceful and the body should land softly like a gymnast. Loose ball dives can be tricky. For this reason players should have a working knowledge of the correct techniques and plenty of practice repetitions before diving for a loose ball during a game.

In diving for loose balls, players should first lower their center of gravity close to the floor by bending their knees. Then push forward extending arms and legs straight out parallel to the floor and landing on their hip flexors. Players should never fall on the knees. Falling on a knee is a good way to end up with a torn ACL or a worse injury.