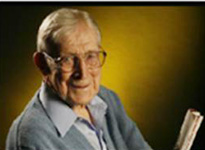 In Memory of John Wooden

“Success is peace of mind that is a direct result of self-satisfaction in knowing you made the effort to become the best that you are capable of becoming.”

Basketball Legend, John Wooden, was one of the greatest coaches in the history of the game. Although, his fame extended well  beyond the sports world, it was his success and achievements on the court for which he is best renowned. He is enshrined in the Basketball Hall of Fame, both as a player and a coach.

He was a three time all-state high school player winning a state championship in 1927 and a three time all-American for Perdue University winning Perdue’s only national championship in 1932. His coaching accolades include an unprecedented 10 NCAA National Basketball Championships and 88 consecutive victories. However, what is most encouraging about John Wooden’s coaching career is that he worked his way up through the ranks being a high school teacher and coach for 11 years, and a small college coach at Indiana Teachers College (now Indiana State University), prior to being hired by UCLA.

Wooden’s dynasty at UCLA was built on sound teaching and high standards. He demanded precise execution of fundamentals and teamwork based on his “Pyramid of Success.” In 2003 John Wooden received the US Medal of Freedom. The highest honor awarded to a US civilian.   John Wooden’s example, leadership and contributions to the game will definitely live on forever.

This potent high post attack was instrumental to the success of many of UCLA’s NCAA championship teams under coach John Wooden, and is commonly used on all levels of basketball, including the NBA. The UCLA Offense is a viable option for teams that do not have a bona fide low post player. It is primarily designed to take full advantage of a post player with good passing and shooting skills, but it also takes advantage of the post up abilities of a point guard and power forward. Like any successful offense, the UCLA offense is based on very sound principles and excellent court spacing.  Learn more about UCLA Offense High Post Rub Offense – Click Here

Individual “On Ball” defense is comprised of three basic fundamentals: Pressuring the player with the ball, containing a dribbler and attacking the picked up dribble. Summer basketball competition is an excellent opportunity for players to refine and improve individual defensive skills. However, with the main emphasis in these games placed on “showcasing” current abilities and strengths rather than utilizing the opportunity to improve their playing skills for future play, defensive efforts are usually lax.

Players need to take full responsibility in making off season skill improvement a primary goal. They do not need a coach or personal trainer. “A game within in a game” – Every time they take to the court, whether for a game, a practice or just a pickup game, they should make it a goal to work on improving a single or related defensive skill. They will still shoot, pass, dribble, and rebound. But, most importantly, they will be working hard to improve a specific defensive skill such as defending against dribble penetration. HoopTactics Premium Members: Learn all about defending the player with the ball – Click Here