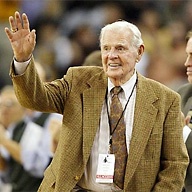 In Memory of Pete Newell

Beloved Hall of Fame coach, who was one of the game’s greatest teachers.

He will be thoroughly missed. However, his legacy and contributions to the game will live on forever.

Be sure to teach players to listen. Demand and get eye contact of all players prior to speaking. It is imperative that any time a coach talks everyone listens (including assistant coaches). Also, make sure that the entire coaching staff is well coordinated and uses the same offensive and defensive terminology. Do not over coach and keep instructions simple. Talk to players’ level. Whenever possible use short descriptive terms. Clarify rather than confuse. Tell players what you are going to teach them, teach them, and tell them what you taught them.

A vital but often overlook position on a team is a defensive “Stopper.” Having an outstanding defensive player is essential to any championship hopes. Like shooters, stoppers aren’t born and just don’t happen. They must be development and nourished. Successful defensive Stoppers are a result of having solid on and off ball defensive fundamentals along with a strong attitude and relentless determination. They are highly challenged and motivated when it comes to stopping and frustrating the opponent’s leading scorer. They thrive on the responsibility and opportunity of denying a good shooter a last second shot opportunity. However, this attitude and self‐confidence must be created, fostered and supported by the coaching staff throughout the season. Since a Defensive Stopper’s role is primarily that of a defensive specialist, any offensive output is a bonus. Their job is to stop not score.

Successfully Attacking the Out Number Situations

Coaches, on all levels, should not make the mistake of assuming and taking for granted that players are skilled in attacking out numbered situations. In fact, there are very few coaches that actually take the time to teach or reinforce the fundamentals and principles required to successfully attack and score on out number situations. Failure to take advantage and capitalize on these situations will not only make the difference in winning or losing close games, it will also cancel any great defensive effort that created the out numbered situation in the first place. T learn more – Premium Members Click Here

Taking an offensive charge is a really big play (RBP) in basketball. It not only takes away a potential basket and creates an offensive turnover but it also assesses the offensive player with an additional penalty of a personal foul. When taking a charge, it is important to try to establish good defensive position by squaring up before the ball handler can get into a shooting motion, preferably outside the three second area. In the case when a blocking foul is called, the ball handler will not receive any free throws (unless in the bonus).

In taking a charge it is very important to eliminate injuries. Players should be taught to absorb contact by executing a shoulder roll. If, the defender remains rigid and does not give on contact, injuries to one or both players are likely to occur. To perform a shoulder roll, on contact, players must first lower their center of gravity by sitting down. Then, roll over using the back of their shoulder, while leaning their head to one side and tucking their chin into their neck. In taking an offensive charge, players should be able to roll over backwards and bounce right back up on their feet using a shoulder roll with either shoulder. Caution: In taking a charge, players should always tuck in their chin and never roll on their neck or head.

By knowing how to properly take a charge, it not only prevents injuries, but, more importantly, players are more likely to take charges during the game.