When teams are evenly matched, the outcome of the game can be determined on a single big play. “RBP’s” (Really Big Plays) are the result of just plain determination and hustle. Really Big Plays include: a successful “Wolf” (defensive recovery), taking a charge, a loose ball recovery, and an offensive rebound off a missed free throw. All of these extra effort actions will ignite and inspire teammates, and, as a result, change the momentum and outcome of the game. The nice thing about RBP’s is that they do not require any special abilities or talent on the part of the players. Anyone can make them. However, RBP’s cannot be taken for granted and must be practiced and refined.

“Wolf” is a term used to describe the action of a defensive player on a break away pursues the dribbler from behind preventing or disrupting a sure lay-up shot. Catching a dribbler from behind to block or disrupt a shot is a RBP. When wolfing and catching a dribbler from behind, players should attempt to block the shot low using the hand closest to the ballhandler. Low blocks not only disrupt the shot, but usually cause the ball to be deflected off the shooter resulting in a turnover. Blocking the ball high can result in contact and a foul being called. Also, when successful high blocks usually go directly out of bounds allowing the opponents to retain ball possession.

When wolfing, the defender should stop and NEVER go under or beyond the backboard. Nothing good ever happens to a defensive player behind the backboard. By exerting strong pressure from behind (wolf), it will force the ballhandler into taking a rushed or hurried shot increasing the chance of a missed shot. Therefore, it is imperative for the defender to assume that the shot will be missed and rebound. Securing a defensive rebound will trigger a counter break and an outnumbered situation going back the other way.

To learn more about defending out numbered situations: Click Here

Loose Ball Save or  Recovery

Going to the floor or out of bounds to recover a loose ball always sets the tone of game. Making a save or recovery that ordinarily would not be made is a RBP. When going to the floor for after a loose ball, players should use a “Volleyball” dive tipping or deflecting the ball to teammate. Always save to a teammate. When ball goes out of bounds, teammates instead of watching should create passing lanes by forming a semi-circle. NEVER save ball directly under the opponent’s basket. Throw the ball out to the sideline or near mid court. That way, if the ball is intercepted defenders are in place. When a ball intercepted directly under basket it will result in an easy basket for opponent.

Caution: In teaching players to properly go to the floor for loose balls, seek the advice and expertise of a volleyball coach. Note: Coaches can be held legally liable if the proper techniques are not taught.

Anticipating and taking an offensive charge is a “Really Big Play” (RBP) in basketball. It not only takes away a potential basket and creates an offensive turnover but it also assesses the offensive player with an additional penalty of a personal foul. When taking a charge, it is important to try to establish good defensive position by squaring up before the ball handler can get into a shooting motion, preferably outside the three second area. Officials have a tendency to call blocks rather than offensive charges inside the 3 second area. If a blocking foul is called when the defender is outside the free throw lane, it will be a non-shooting foul (unless in the bonus).

In taking a charge it is very important to eliminate injuries. Defenders must be taught and trained in the correct way to absorb the contact.   By knowing how to properly take a charge not only prevents injuries; but, more importantly, players are more likely to take charges during a game. 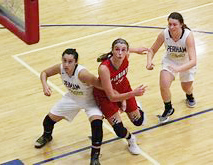 If you analyze “Out of Bound” situations, they are unique in that it is the only time during the game of basketball where the defense actually has an advantage. Coaches should exploit this numerical player advantage to its fullest. Since the vast majority of out of bounds plays revolve around screens, the various techniques used to defend against screens can be incorporated into an effective out of bounds defensive attack.

To learn more about Defending Out of Bounds Plays – Click Here